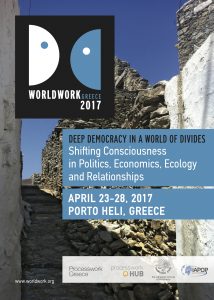 Worldwork, is process work applied to a wider community. Every 2-3 years a World work conference takes place in a different country in the world where a team of Process Workers organise the conference and invite people from many different countries. Worldwork 2017 welcomed some 540 people from over 40 countries, and met this year in Porto Heli Greece. This is a very beautiful land of blues seas and skies and generous people in midst of social change and financial crisis. This multicultural and multilingual gathering of people reflects and celebrates our global village. Its purpose is to work on the tensions and conflicts we face and find new ways of communicating across cultural differences towards more humanity. It enables us to create networks of support with greater understanding across our nations and peoples.

Various issues and social groups were awarded our focus and facilitation by experienced facilitators and held by the containing group with the feelings, pains, injustices and resiliences of many people who spoke up about their personal and collective experiences. (This is the practice of Deep Democracy)

One of the deepest aspects that I learned and bring home with me from worldwork is how we share our privileges with others. So I would like to write about what I learned from the group process on LGBTQI group as we gathered in the middle of the larger group to find out more of our purpose and our collective identity.

First of all we saw one another, who identifies as LGBTQI. This is significant, as in general we do not always see who is LGBT unless we go through a coming out thing – which I do less and less these days. In my latter years it no longer seems to matter whether people recognise my sexual orientation or gender expression, which I feel is quite sad, but there are many things in life I love and I love being gay!

I grew up and live in the UK where same sex marriage is now legal and same sex relationships are visible in our streets (while out shopping today I saw 2 lesbian couples holding hands). Gender queer is a movement where I was able to explore my gender expression – I see myself as a woman and also at times non-binary beyond the restrictions of ‘woman’ to embrace a third gender in my behaviour and presentation or roles in the world – I love this freedom in being myself.

The terms I am using, like LGBTQI, at times seem cumbersome as we describe our sexual orientation and gender diversity; lesbian, gay, bisexual, transgender or transsexual, queer and intersex. But we need to be patient, for we had to invent our own language to describe our experiences and sense of self in this world. Much work has gone into these expressions to recognise who we are.

And I feel the need to add another letter ‘I’ to this LGBTQI title – the one of intersectionality. For we are a extremely diverse group of people; this includes our multicultural heritage, multilingual abilities, people with disabilities and other abilities, age group or different generations, in a family set up or single, issues of isolation, from different faiths – this discussion is big in todays world of religious tensions, notions of appearance and gender expression can determine how much we fit in our various contexts, access to education and work, economical backgrounds and health issues and access to health and more. There we met at worldwork, of many nationalities, some from countries which deny our very existence as lgbt people or where holding hands is a social risk! So where do we begin to share our experiences, recognise our privileges and listen to our different and often difficult experiences as lgbt folks in the world? What actually took place at Worldwork I wish to remain confidential and valued by that moment in time. Here I express my own thoughts since the meeting.

I feel lucky to live in the UK. In most big cities there are LGBT centres which support and care for our wellbeing. I live in Edinburgh, Scotland with a great LGBT centre of social activities, workshops, therapy, groups from knitting to creative writing, music jams and choirs and where we can meet and build community. There are networks of LGBT people set up in Dumfries and Galloway, in Glasgow and recently in Kirkcaldy, my childhood home town, which I am very happy about and further north in Stirling and Inverness, and outreach work continues in more rural areas where at times being the ‘only gay person in town’ can be quite isolating. There is the Equality Network which campaigns for our rights and justices, lobbying politicians and gaining equal marriage, transgender status and fighting for the safety of asylum seekers who flee their countries because of threats to their lives and identities. There is Ourstoryscotland, a grass roots organisation led by a gay couple retired academics, who organise creative workshops to help us tell our stories in pictures, poems and writings. They keep these stories in archives to record our lived experiences and history. This archive lives in the library in Glasgow. There is LGBT youth, a marvellous organisation which welcomes young people to meet in a safe space and explore growing up. They offer workshops on themes such as role models and offers support from bullying in schools. Yes I am so grateful to all these organisations and people and friends who are dear to me who create and sustain such networks so that I can feel proud of being gay.

I write this page and for some in the UK it may seem obvious that we have these resources at our doorstep as we become more integrated in our society. But I cannot take these things for granted. For I saw once more the confusions and the fears, the silences and invisiblity of many LGBT people growing up in countries where hate, rejection and denial are common experiences, even punishment and killings for being gay or transgender. I wish from my deepest heart that the support and recognition, the care and understanding that I experience in my collective life can be shared with lgbt people all over the world.

It is my idea to create with people who are interested in a kind of network so that we can support one another and build our resources and resilience as lgbt people in every part of the world.

As I have come to realise that we are a very diverse group of people – as LGBTQI people come from every social background too. So where do we start, if diversity is our common ground!

Once upon a time there was a teenage girl, Kim who grew up in Kirkcaldy, Scotland. She left school and took a trip to France in search of experience. She met the world. In a nutshell she met her first partner. His name was Kavous and he came from Iran. They met in Paris. They barely spoke the same language as they were both learning to speak French. Kim came back to Scotland but she was restless for adventure in the bigger world and so returned to Paris. They travelled to other regions in France, hitch hiking to Bordeaux in the West, Honfleur in the North and in La Cote d’Azur where they sold little Jeux indiens, which they made out of wire and beads and sold on the promenade in the warm summer evenings. Returning to Paris, they found their first little home together. Kim worked as a jeune-fille aupair and Kavous studied philosophy and movie making. And so their adventures went on over 10 years, Kim became a schoolteacher in a primary bilingual school and Kavous continued to study until the money ran out and it was time to go their separate ways.

The journey back to Scotland was not an easy one. Kim had changed, the world had changed her and so she could not return to her small town. Yet her family helped her to set up home in Edinburgh, she joined a community theatre company and lost her hair to the condition alopecia.

She played her part in the play ‘mothers and daughters and wild, wild women’ and came out as gay. She got inspired by transgender folks who taught her to love her alopecia and make her own kind of ‘look’ in a patch-work sort of style with scarves and hats. Then the non-binary folks who refuse to choose between man and woman and inspire a third kind of gender, somewhere off the mark. We, lgbtqi folks, have always made it up as we go along. We have invented words to describe ourselves, new ways of relating and celebrating our relationships through new ritual and pushed the limits of gender in our appearances and roles in society.

Today I am happy in my work as a process – oriented psychotherapist in Wellspring, a therapy centre in Edinburgh. And all this happened in my country the UK thanks to many LGBTQI people who organised centres, workshops, conferences, reaching out to the BME community, people with disabilities, age diversity, and health issues so that we all can live and thrive in our own unique ways. I have been lucky to be part of this network of people. And my deepest wish is that LGBTQI people the world over also have access to this collective support, care and love and inspiration to tell their story as I have told mine.

Our relationship to power

Posted On December 16, 2014 ~ 0 Comments
This post aims to illustrate a process work approach to our understanding and connection to Power. 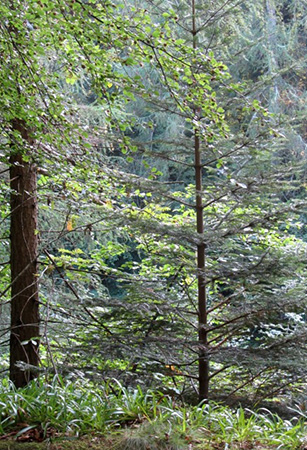